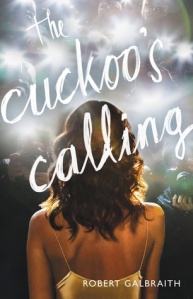 Make sure you check out part one and part two of our discussion on The Cuckoo’s Calling!

Holly has been traveling for work and I have an insane 3 year-old who refuses to go to bed, so we had to summarize our thoughts on the Cuckoo’s Calling by text message. (edited by Amanda to make sense and to cut spoilers)

H:  I finished! I was not sure what to expect with this book at all, but I definitely enjoyed it more than I was expecting! And spending  most waking hours at various and sundry airports was not at all annoying because I was so engrossed in finishing my book!

A:  I also enjoyed this far more than I expected to.  I was so glad that the character I suspected was not the creeper I was predicting him to be.  I was not going to be entertained by that story line.

H:  Yes!! We totally learned our lesson suspecting that person.

A:  I think that Rowling has a gift that makes you care about her characters with very little interaction.  You never meet Lulu alive, but you have to feel sadness and pity for her-even though there are definitely aspects you do not like about her as well.

A: Lulu is like the anti-Harry Potter in a way.  She has no one real to love and support her in life.  Where are her Hermione and Ron?!

H: Oooh, that is a profound comparison about Lulu and HP.  Except wait, HP grew up with no one (visible to him) loving and supporting him.  And Lulu had everyone around her clamoring to get close to her.  So I’m not sure if they are alike or antithetical.

A: Hmm.  Maybe I was trying to sound too smart :p

H:  And I did appreciate the genuineness some characters showed in their affection for Lulu, though it’s hard to tell who is genuine sometimes!

A:  No one was genuine except Guy!! And maybe crazy mama.

H:  And that Strike! He is so clever.  I want to read it again just to see what I can pick up on that I missed.

A:  And Robin! Is her engagement totally falling apart as the series continues?

H:  Oh! I can’t decide if that will happen.  Or if that’s what I want to happen or not.  I am definitely interested to see what Robin gets up to in the next book.  When does that come out?

A:  August 1, 2014 per Goodreads-I’m not necessarily buying that date due to the lack of details.  And Amazon has nothing.

H: My one gripe, because I usually have one, is that the BIG REVEAL scene felt a little dramatic and unrealistic… like that scene was written for a movie.  Because of course in a movie everyone has to spell out what they know and how.  But, maybe its logical based on those characters and their personalities and what they’re trying to prove.

A:  Totally agree.  She could do that in HP because a) it was a “kids” book and b) with magic you can do whatever you want!