A while back I posted the first edition of book pairings – books that you really should read together. After I stumbled upon another great pairing, I realized it was time to revisit this topic – this, time with a theme. 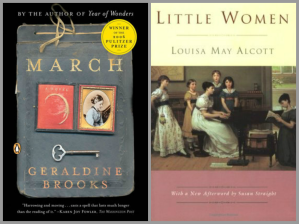 March is the story of Mister March, the father of Louisa May Alcott’s four Little Women, during the year he serves as a chaplain in the Union army. This is pretty clear in the description on the back of the book, only I didn’t pay attention so I didn’t catch this until I started reading. After I finished March (loved it!), I had to revisit Little Women, which I vaguely remember reading at some point. I’m at the halfway point, and, while I understand its long-lived sentimental appeal, I very much appreciate being able to fill in the boring bits with some of the backstory from March. There is more than meets the eye to the March family, according to Geraldine Brooks!

Okay, there are a number of Poe works that I could have added to this pair, but, since I’d like this list to include books I might actually get to in the semi-near future, I chose this short, 80-page scholastic collection of Poe poems over an 800-page Poe anthology. You guys, I live down the street from Poe’s honeymoon retreat with his 13-year old cousin. This takes place years later in New York, but I’m still pretty intrigued by this historical fiction. And, if I’m going to read it, I really ought to pair it with some authentic Poe, right? 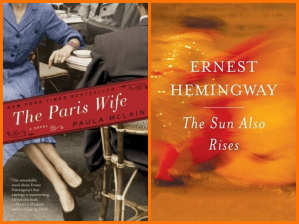 I definitely stole this one from a comment on my first Book Pairings post (thanks Katie!). I know I read some Hemingway in high school, though I’m pretty sure it was A Farewell to Arms. I’m also fairly certain that I did not enjoy it, but I’m willing to give it another go. After all, I had some questionable taste in high school. So, maybe I’ll start with The Paris Wife and then give ol’ Ernest another shot. Maybe.

Any other pairs about spouses to add to the list?

*Updated 10/24/2014 because I had my facts wrong about Mrs. Poe. The Mrs. Poe in the title is indeed the same cousin that Poe honeymooned in Petersburg with, and was the only woman that Poe married. However, the story centers around Frances Osgood, an alleged mistress, and her relationship with Poe – and with Mrs. Poe.