The Painter of Battles, Arturo Perez-Reverte 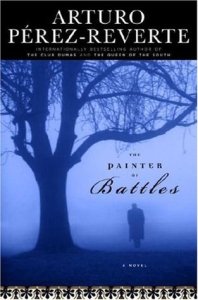 From Goodreads…
Andres Faulques, a world-renowned war photographer, has retired to a life of solitude on the Spanish coast. On the walls of a tower overlooking the sea, he spends his days painting a huge mural that pays homage to history’s classic works of war art and that incorporates a lifetime of disturbing images.
One night, an unexpected visitor arrives at Faulques’ door and challenges the painter to remember him. As Faulques struggles to recall the face, the man explains that he was the subject of an iconic photo taken by Faulques in a war zone years ago. “And why have you come looking for me?” asks Faulques. The stranger answers, “Because I’m going to kill you.”
This story transports Faulques to the time when he crossed continents to capture conflicts on film with his lover, Olvido, at his side. Until she walked into his life, Faulques muses, he had believed he would survive both war and women.
As the tense dialogue between Faulques and his visitor continues, the stakes grow ever higher. What they are grappling with quickly proves to be not just Faulques’ fate but the very nature of human love and cruelty itself.
I am kind of afraid to tell my husband I finished this book, but at least I have another off my 2015 TBR Challenge list.  I think my first Arturo Perez-Reverte book was the Queen of the South.  That book is gorgeous!  The story is captivating and tense and Teresa is a totally kick-ass character.  I forced that one on my husband and he loved it also – we have since collected almost all of Perez-Reverte’s books but for some reason I couldn’t bring myself to pick up the Painter of Battles when it came out.  I think the subject matter — the Balkan War- intimidated me.  My husband counts this among his favorites but sadly it turns out this just was not for me.
I was totally caught up in the beginning when the stranger appears and tells Faulques that he was there to kill him. When I learned why the stranger was there I was really emotional, but sadly soon after that I felt myself losing interest. I went back and forth as I read- interested and then out of it.  I felt bogged down in the words a lot of the time, which is surprising for such a short book.
There were parts of this book that were just beautifully written.  I can only imagine how it would flow if you read his work in the original Spanish.  I felt like I could see the brutality of the battles Faulques painted and photographed.  The scenes between the characters just didn’t have that depth. But I felt like I was lost as Faulques was deep in in the past or pondering the violent tendencies of human kind.  This one is going back on the bookshelf quietly and not onto my list to reread.  I might pick up the Queen of the South again soon though.
Have you read any of Perez-Reverte’s books?  Do you have a favorite?