The Sandman, Preludes and Nocturnes, Neil Gaiman, (The Sandman #1) 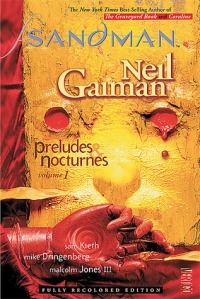 In PRELUDES & NOCTURNES, an occultist attempting to capture Death to bargain for eternal life traps her younger brother Dream instead. After his 70 year imprisonment and eventual escape, Dream, also known as Morpheus, goes on a quest for his lost objects of power. On his arduous journey Morpheus encounters Lucifer, John Constantine, and an all-powerful madman.
This book also includes the story “The Sound of Her Wings,” which introduces us to the pragmatic and perky goth girl Death.

I have made it pretty clear I think that I’m basically in love with everything that Neil Gaiman writes.  If I had one book I could read forever it would be American Gods.  So I was kind of ashamed that I’d never tried his graphic novel series The Sandman – thanks to the Roof Beam Reader TBR Challenge I can say I’ve crossed the first in the series off my list!   Of course now the next book is on my TBR but that’s ok because it’s Neil Gaiman.

So the Sandman, Morpheus, is captured by some creepy dudes who are trying to actually capture Death.  When he finally escapes – 70 years later – there are lots of scary dreams happening.  Morpheus needs to find his objects of power to reestablish his power as the King of his land and must deal with humans, demons and total madmen to do so.

There are some worlds that Neil Gaiman has created that I would live in – The Sandman’s is not one of them.  I do not want those dreams thank you very much.  The dreams in the Sandman won’t just leave you scared when you wake up – you might not wake up at all.  I expected darkness, I don’t think I expected the level of violence that would be in these stories or maybe it just hit me differently because it really is right there to see the blood not in my imagination?  Either way – ick.

Morpheus was a far more sympathetic character than I expected though.  I was really sad he had so much work to do to recover from his kidnapping.  I was sad for the people that were having such horrific dreams because he was out of balance.  And Death – I kind of loved her as strange as that sounds.  I hope she’s present in the next book!

I haven’t read a lot of graphic novels but as I read this I was just blown away by the amount of work that had to have gone in – writer, artist, colorists.  How do they all collaborate I wonder?  Definitely something I’ll be reading about when I have the next 4 books in the TBR challenge read!  My favorite thing about this book – I finished and handed it to my husband who immediately started reading it too. Gaiman books for everyone!