These are two books that I was so excited about but ultimately just could not get into.  Is it me?  Or is it the books?  I feel like a bit of a black sheep I admit. 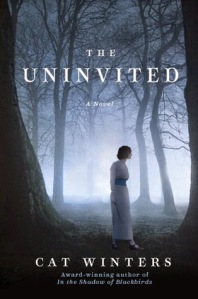 Twenty-five year old Ivy Rowan rises from her bed after being struck by the flu, only to discover the world has been torn apart in just a few short days.

But Ivy’s life-long gift—or curse—remains. For she sees the uninvited ones—ghosts of loved ones who appear to her, unasked, unwelcomed, for they always herald impending death. On that October evening in 1918 she sees the spirit of her grandmother, rocking in her mother’s chair. An hour later, she learns her younger brother and father have killed a young German out of retaliation for the death of Ivy’s older brother Billy in the Great War.

Horrified, she leaves home, to discover the flu has caused utter panic and the rules governing society have broken down. Ivy is drawn into this new world of jazz, passion, and freedom, where people live for the day, because they could be stricken by nightfall. But as her ‘uninvited guests’ begin to appear to her more often, she knows her life will be torn apart once more, but Ivy has no inkling of the other-worldly revelations about to unfold.

Slow going for me – but what made me stop this was the main character’s decision to jump into bed with a man to apologize for the fact that her father and brother murdered his brother.  Let me repeat that, she decided she could sex away all the pain and grief to a total stranger.  I’m all for sexy books, but something about this just felt icky.  I tried to keep going with this book because I was so excited for it, but I really just don’t want to read about a relationship founded like this.  I also wanted to see the Uninvited by this point in the book.  I saw so many great reviews I feel kind of guilty putting this down, but I don’t want to hate read it either.  Definitely not my last Cat Winters book though!  I have In the Shadow of the Blackbirds on my shelf staring me down.  Her 2016 titles sound so good too!

Have you read Cat Winters’ books?  Am I missing out by stopping?

Brooks takes on one of literature’s richest and most enigmatic figures: a man who shimmers between history and legend. Peeling away the myth to bring David to life in Second Iron Age Israel, Brooks traces the arc of his journey from obscurity to fame, from shepherd to soldier, from hero to traitor, from beloved king to murderous despot and into his remorseful and diminished dotage.

The Secret Chord provides new context for some of the best-known episodes of David’s life while also focusing on others, even more remarkable and emotionally intense, that have been neglected.  We see David through the eyes of those who love him or fear him—from the prophet Natan, voice of his conscience, to his wives Mikal, Avigail, and Batsheva, and finally to Solomon, the late-born son who redeems his Lear-like old age

I am so bummed about this!  I love Geraldine Brooks’ books so much.  If you haven’t read Year of Wonders you need to rethink your life choices and find a way to get a hold of it immediately.  I thought March was a great book and I really liked the People of the Book.  I love how widely Brooks’ topics range and I was very excited to read her story of King David.  I don’t know if it was my mood in the last month or what, but I just wasn’t feeling this book.  The writing was nothing less than you’d expect from Brooks, but I have not been into the story at all.  When I realized I was trying to convince myself to pick-up my kindle to try again I decided to stop.  I will definitely give this a try again one day when I’m in the mood for a read that goes back this far in time.  If you’re a fan of Geraldine Brooks check it out – and tell me if you think I’m crazy for stopping.

Thank you William Morrow and Viking and to Edelweiss for these advance copies in exchange for an honest review.