I’ve been harsh on my young adult reading so far this year! 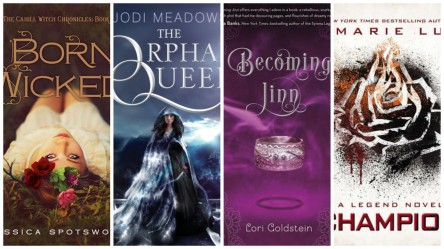 Everybody knows Cate Cahill and her sisters are eccentric. Too pretty, too reclusive, and far too educated for their own good. But the truth is even worse: they’re witches. And if their secret is discovered by the priests of the Brotherhood, it would mean an asylum, a prison ship—or an early grave.

Before her mother died, Cate promised to protect her sisters. But with only six months left to choose between marriage and the Sisterhood, she might not be able to keep her word… especially after she finds her mother’s diary, uncovering a secret that could spell her family’s destruction. Desperate to find alternatives to their fate, Cate starts scouring banned books and questioning rebellious new friends, all while juggling tea parties, shocking marriage proposals, and a forbidden romance with the completely unsuitable Finn Belastra.

If what her mother wrote is true, the Cahill girls aren’t safe. Not from the Brotherhood, the Sisterhood—not even from each other.

Well this was the first bust for my 2016 TBR Challenge.  I am not 100% sure how I ended up with Born Wicked on my list to read – I must have been in a witchy phase and I had heard good things about this series.  I read about 100 pages about Cate and her worries about hiding the magic she shares with her sister and I realized – I just wasn’t going to care what happened.  Cate learns she and her sisters might be the witches in an ominous prophecy – that had potential.  But then another trio of sisters begins to be arrested.  Why did it take 16 years for that to happen?  When I start nitpicking at plot details I know its time to just stop.  I’m replacing this book on my TBR Challenge List with The Book of Unknown Americans by Cristina Henriquez (not at all alike but oh well!).

Source: ARC from ALA Midwinter Meeting 2015

Wilhelmina has a hundred identities.

She is a princess. When the Indigo Kingdom conquered her homeland, Wilhelmina and other orphaned children of nobility were taken to Skyvale, the Indigo Kingdom’s capital. Ten years later, they are the Ospreys, experts at stealth and theft. With them, Wilhelmina means to take back her throne.

She is a spy. Wil and her best friend, Melanie, infiltrate Skyvale Palace to study their foes. They assume the identities of nobles from a wraith-fallen kingdom, but enemies fill the palace, and Melanie’s behavior grows suspicious. With Osprey missions becoming increasingly dangerous and their leader more unstable, Wil can’t trust anyone.

She is a threat. Wraith is the toxic by-product of magic, and for a century using magic has been forbidden. Still the wraith pours across the continent, reshaping the land and animals into fresh horrors. Soon it will reach the Indigo Kingdom. Wilhelmina’s magic might be the key to stopping the wraith, but if the vigilante Black Knife discovers Wil’s magic, she will vanish like all the others.

I had so much hope for Wilhemina!  An orphaned teenage queen trying claim her land and save her people from treacherous conquerors?  Sign me up.  But when Wil and her faithful friend sneak into the palace and she maneuvers herself into a meeting with the evil king – where he so conveniently gives her all kinds of important details?  No thank you.  Things were starting to feel a bit too predictable of where a knife might end up right in Wil’s back. Another series off the list!

Harry Potter meets Twilight in debut novelist Lori Goldstein’s magical tale of sixteen-year-old Azra, a teenage girl whose Jinn ancestry transforms her into a modern-day genie. With the power to grant anyone’s wish but her own, Azra pretends to be human, spending her days at the beach, enjoying a budding romance, and evading her Jinn destiny. But when she discovers she may not be like the rest of her circle of Jinn, will her powers save or endanger them all?

Azra wakes up on her 16th birthday in an entirely new beautiful body – give me my first eyeroll.  Why can’t Azra save the world in her shorter body without perfect curves?  Azra doesn’t want to be a jinn, but knows she can’t change anything. That doesn’t stop her from doing a lot of whining to her mother and to herself about the path ahead of her.  As her mother has been Azra is part of a circle of Jinn all coming of age together.  So we have a group of mean girls basically with Azra as the odd one out who doesn’t want her powers.  It felt like all Azra was doing was taking her new powers for granted, not learning what she could be doing and then whining some more.  I’m out.

June and Day have sacrificed so much for the people of the Republic—and each other—and now their country is on the brink of a new existence. June is back in the good graces of the Republic, working within the government’s elite circles as Princeps-Elect, while Day has been assigned a high-level military position.

But neither could have predicted the circumstances that will reunite them: just when a peace treaty is imminent, a plague outbreak causes panic in the Colonies, and war threatens the Republic’s border cities. This new strain of plague is deadlier than ever, and June is the only one who knows the key to her country’s defense. But saving the lives of thousands will mean asking the one she loves to give up everything.

I hated to give up at the end of a trilogy!  I enjoyed the first two books in this series enough, but I think in part I’m just at the end of my dystopian rope.   I wanted to know what happened to Day and June but I also found the language to be a bit ridiculous.  I couldn’t picture Day talking the way he was written and I couldn’t keep reading.  I am still eager to pick up Lu’s new series and start The Young Elites!

Thankfully I’ve read two recent YA books that I LOVED and have to review soon so be on the lookout for those!