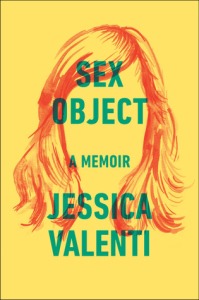 Author and Guardian US columnist Jessica Valenti has been leading the national conversation on gender and politics for over a decade. Now, in a darkly funny and bracing memoir, Valenti explores the toll that sexism takes from the every day to the existential.

Sex Object explores the painful, funny, embarrassing, and sometimes illegal moments that shaped Valenti’s adolescence and young adulthood in New York City, revealing a much shakier inner life than the confident persona she has cultivated as one of the most recognizable feminists of her generation.

In the tradition of writers like Joan Didion and Mary Karr, this literary memoir is sure to shock those already familiar with Valenti’s work and enthrall those who are just finding it.

I found Jessica Valenti’s book The Purity Myth: How America’s Obsession with Virginity is Hurting Young Women to be totally fascinating and well done even as it scared me.  I appreciate all the work she did on feministing and I think her essays are always worth reading.  I’ll be honest though, I had a hard time with Sex Object.  I had to put this book down for long breaks before I could get through it.  The topics are hard – sexualization that Valenti’s been experiencing since childhood, touches on familial sexual abuse, and inappropriate teacher behavior.  In adulthood Valenti goes into her relationships and briefly into her path through colleges to feministing, then lightly into her marriage and her traumatic pregnancy.

Valenti asks “Who would I be if I didn’t live in a world that hated women?”  Maybe it’s because I am lucky enough that I haven’t felt hated that I hard a hard time relating to her stories?  Her experiences on the New York subways are not the ones I have had on my train rides.  Her stories were brutal and painful to read at times.  They scared me.  I’m raising my kid to take the train – I don’t want to think about men exposing themselves to her on the Brown Line one day.  The harshness of her language and the topics I think in part made me struggle with Sex Object – there are only so many stories I want to read about anyone’s sexual history and partly the flow of chapters was somewhat jarring.  I would have liked deeper essays rather than short and shocking chapters.

I can’t imagine the hatred and vitriol that Jessica Valenti is exposed to because of the internet and the work that she does – I looked at her twitter as part of writing this review and Valenti announced a social media break after she received a rape threat directed at her 5 year-old daughter.  All this woman does is advocate for the rights of women and she finds hate directed at her helpless child?  What the fuck is this world?  I have a 5 year-old daughter and I’m in tears and nauseated at the very thought – and I’m angry!

That’s why the book is important – Valenti tells her stories and experiences and they’re important and deserve validation.  This wasn’t an easy book but oh my God what is this world?  Some of the stories felt like too much – too much sex, too much vulgarity, too many drugs – but this is real life and it should make you react physically and even angrily at times.  Only then will we really be determined to follow Valenti and advocate for change.

Thank you Dey Street Books and Edelweiss for this advance copy in exchange for an honest opinion.