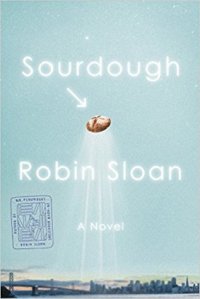 Lois Clary, a software engineer at a San Francisco robotics company, codes all day and collapses at night. When her favourite sandwich shop closes up, the owners leave her with the starter for their mouthwatering sourdough bread.
Lois becomes the unlikely hero tasked to care for it, bake with it and keep this needy colony of microorganisms alive.  Soon she is baking loaves daily and taking them to the farmer’s market, where an exclusive close-knit club runs the show.
When Lois discovers another, more secret market, aiming to fuse food and technology, a whole other world opens up. But who are these people, exactly?

So I have a new love in my life.  A few months ago off a neighborhood Facebook page I claimed a container of sourdough starter.  His name is Bruce – Bruce Rauner to be specific thanks to my 7 year-old.  I’m obsessed.  Like Lois in the book I didn’t know quite what to expect of my starter but have learned it is like having a pet.  A stinky yet delicious pet full of possibilities.  I haven’t been brave enough to actually bake a loaf of bread but I’m having so much fun baking other things with Bruce.

So you see why I HAD to read Sourdough when I read in a review that this book is about a sourdough starter that wants to take over the world.  Lois lives a lonely existence aside from a nightly delivery of amazing spicy soup and sourdough.  When the brothers cooking the food move on, they gift Lois with some sourdough starter and instructions to bake her own bread.  She just starts baking!  As someone who has watched a number of how to bake sourdough videos on YouTube and started obsessively listening to baking podcasts this threw me.  But she bakes her own magical sourdough and life changes dramatically from there.

This book was delightfully quirky and just what I needed.  Now I have to finally pick-up Sloan’s other book, Mr. Penumbra’s 24 Hour Book Shop and work-up the nerve to bake a loaf of bread.  Any bread bakers want to advise me?

I’ve been reading a lot of middle grade fiction lately, maybe I’m just way too excited for my big 7 year-old to be reading with me.  When asked to look at this middle grade non-fiction book I was way too curious to pass it up. 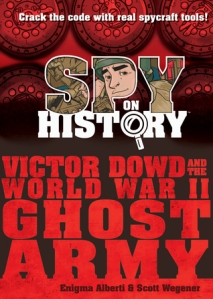 Your mission: Find Victor Dowd’s missing sketchbook. And discover one of the most unusual stories of World War II.

Meet the 603rd Camouflage Engineers, better known as the Ghost Army. This group of artists and sound engineers were trained to deceive the Germans in World War II with everything from fake tanks to loudspeakers broadcasting the sound of marching troops. And meet Victor Dowd, a real-life sergeant who with his fellow Ghost Army troops fought his way from Normandy, through France, and eventually across the Rhine.

First of all, why have I not heard of the Ghost Army?  A whole unit devoted to fooling Hitler and the Nazis with artwork, sound effects and clever camouflage – what an amazing story!  I read this almost entirely in a train ride, so less than an hour, a fast read but I was completely engrossed.  Yes, this was written for kids but my interest is piqued and I will be finding some more titles on this unit to read soon.
This book didn’t talk down to the young reader but made the Ghost Army’s story engaging by talking about Victor Dowd and his experiences as an artist being used to paint planes and trucks to trick the Nazis about the soldiers and units in place.  I haven’t looked at kids’ nonfiction since I was a kid and I wasn’t sure how it would come together.  Victor’s individual story made it compelling on an individual level I think and then makes the branching out into the rest of the Ghost Army easier for a young reader who might not be used to nonfiction.
And then there are the spy tools.  Spy tools!  My daughter wasn’t interested in the topic – she is too young and this isn’t her thing – but even she was ready to break out the spy tools to solve the mystery of the missing sketchbook.  These were awesome!
I loved this book! I will definitely be gifting copies to some young readers in my life and sending it to my daughter’s school.  I can’t wait to pick up Enigma Alberti’s first Spy on History book, Mary Bowser and the Civil War Spy Ring -that is a topic we’ve talked about at home so I hope the kid is ready.
Thank you so much Workman Publishing for this copy in exchange for an honest opinion!
2 CommentsLeave a comment
Follow Gun In Act One on WordPress.com