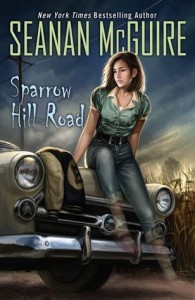 Rose Marshall died in 1952 in Buckley Township, Michigan, run off the road by a man named Bobby Cross—a man who had sold his soul to live forever, and intended to use her death to pay the price of his immortality. Trouble was, he didn’t ask Rose what she thought of the idea.

They have names for her all over the country: the Girl in the Diner. The Phantom Prom Date. The Girl in the Green Silk Gown. Mostly she just goes by “Rose,” a hitchhiking ghost girl with her thumb out and her eyes fixed on the horizon, trying to outrace a man who never sleeps, never stops, and never gives up on the idea of claiming what’s his. She’s the angel of the overpass, she’s the darling of the truck stops, and she’s going to figure out a way to win her freedom. After all, it’s not like it can kill her.

You know how sometimes you get so excited when one of your autobuy authors has a new book that you preorder it and wait and wait and wait and then you’re so excited you think you’ve already read it?  Just me? I danced in my chair when I got my hands on an ARC of Seanan McGuire’s The Girl in the Green Silk Gown and decided to “reread” Sparrow Hill Road in anticipation.  Imagine my surprise when I realized I was reading a brand new book!  So… on to Rose’s story.

Rose Marshall is a beloved ghost aunt to the Price family in McGuire’s Incryptid series – one of my favorites – I know a ghost aunt sounds odd but just read them!  When we meet Rose she’s been dead much longer than she’s been alive and she has tons of stories to tell.  She rides the roads as a hitchhiking ghost preventing accidents when she can and when she can’t she tries to guide other souls home.

I should have known McGuire would write ghost stories that touch my heart rather than scare me.  This is the author that got me obsessed with zombies (just her zombies – and just read Feed if you haven’t!).  Rose tells her story going back and forth in time until we find out what happened on Sparrow Hill Road the night she died and why Bobby Cross still won’t let her be – that’s the part of this ghost story that gave me chills.   We learn ghosts can make families of choice and that being dead doesn’t stop hurt and regrets. Listen to Rose’s stories – maybe you’ve seen her on the road in her green silk gown.

I am reading the news in short snippets these days because unless it’s about Serena Williams or maybe Prince Louis’ christening it all gives me panic attacks. I’ve been reading fiction voraciously to escape (and a few nonfic too) and The Chicago Public Library is giving me everything.  Here’s a list of what I’ve been loving – other than reading Goodnight Moon on repeat.

What else is out there that I should be reading to avoid reality? 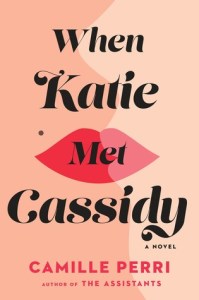 Katie Daniels is a perfection-seeking 28-year-old lawyer living the New York dream. She’s engaged to charming art curator Paul Michael, has successfully made her way up the ladder at a multinational law firm and has a hold on apartments in Soho and the West Village. Suffice it to say, she has come a long way from her Kentucky upbringing.

But the rug is swept from under Katie when she is suddenly dumped by her fiance, Paul Michael, leaving her devastated and completely lost. On a whim, she agrees to have a drink with Cassidy Price-a self-assured, sexually promiscuous woman she meets at work. The two form a newfound friendship, which soon brings into question everything Katie thought she knew about sex—and love.

When Katie Met Cassidy is a classic story of girl meets boy, boy breaks her heart and girl meets… girl.  This was not my typical romance at all and I loved it.  I loved the sparks between Katie and Cassidy and the flirting.  I also loved the questioning and challenging of relationship boundaries and terms.  Katie hadn’t thought about another woman until she meets Cassidy and then she had to rethink everything.  I enjoyed going back and forth between Katie’s doubts and Cassidy’s surety – they were a fantastic pair.  I honestly wasn’t sure how this book was going to end which was extremely refreshing.
I thought this was a fun and fast read – I was done in a day – but it could have been longer.  More depth into Cassidy’s family and her friendships wouldn’t have hurt at all  It comes through loud and clear that she’s a player but there clearly could have been much more to her.   For light summer though read this was just right and I will definitely make an effort to pick up Perri’s The Assistants now.
Thank you GP Putnam for this advance copy in exchange for an honest opinion!
1 CommentLeave a comment
Follow Gun In Act One on WordPress.com