Have we mentioned our love for Sonali Dev’s The Bollywood Affair? No? Read our sister read-along posts here and here.

Anyway, given how fun that book was, we were excited to start Dev’s next novel: The Bollywood Bride.

This book opens with a flashback, of  Ria and Vikram meeting as children, before we fast forward 20 years. Ria Parkar is a Bollywood film star with a reputation as “the Ice Princess” – cold and beautiful. She gets a phone call from her cousin Nikhil, letting her know that he’s getting married in two weeks in Chicago. She’s terrified at the idea of going “home,” somewhere she hasn’t been for ten years.

We get a hint, of course, that she can’t go home because of something that happened between her and Vikram ten years ago. And she can’t not go home, because her cousin Nikhil is like a brother to her.

Ria’s between a rock and a hard place. Let’s do this.

Holly: I am at 17%. Ria is no Mili from The Bollywood Affair. And Vik is very very angry!

Amanda: They are both way angry! I like Mili better thus far.

Amanda: It makes me laugh that this book is taking place in Naperville. [Not terribly far from where we grew up]

Holly: I know! And they are growing on me.

Amanda: Totally. I am almost at 60%. I love the cousin and the fiance. It’s getting good! I can’t wait for the wedding!

Okay, we’ll finish up and be back with more. I’m pretty sure we’re going to end up loving this book and vowing to attend more Indian weddings. #truth

Anyone want to invite us to an Indian wedding?  This is a perfect weekend read thus far – cheesy and delightful. 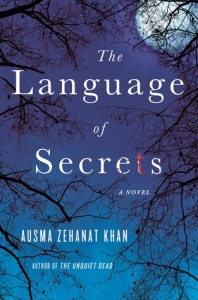 Detective Esa Khattak heads up Canada’s Community Policing Section, which handles minority-sensitive cases across all levels of law enforcement. Khattak is still under scrutiny for his last case, so he’s surprised when INSET, Canada’s federal intelligence agency, calls him in on another potentially hot button issue. For months, INSET has been investigating a local terrorist cell which is planning an attack on New Year’s Day. INSET had an informant, Mohsin Dar, undercover inside the cell. But now, just weeks before the attack, Mohsin has been murdered at the group’s training camp deep in the woods.

INSET wants Khattak to give the appearance of investigating Mohsin’s death, and then to bury the lead. They can’t risk exposing their operation, or Mohsin’s role in it. But Khattak used to know Mohsin, and he knows he can’t just let this murder slide. So Khattak sends his partner, Detective Rachel Getty, undercover into the small-town mosque which houses the terrorist cell. As Rachel tentatively reaches out into the unfamiliar world of Islam, and begins developing relationships with the people of the mosque and the terrorist cell within it, the potential reasons for Mohsin’s murder only seem to multiply, from the political and ideological to the intensely personal.

I was blown away last year by Ausma Zehanat Khan’s debut, The Unquiet Dead.  I can’t think of another mystery that had me so caught up in the plot and also left me in tears.  So I was very excited to start her next book about Detectives Khattak and Getty.  A Muslim police officer investigating in a mosque for a murder suspect – while there is also a terrorism investigation happening.  Sounds almost as intense as Khan’s last book about a Balkan war criminal sneaking into Canada and ending up murdered.  Khattak is so different than a basic murder cop you might read about – he has so many layers and his story as I know it so far is fascinating.   There is so much beauty to Islam and I really liked getting Khattak’s interpretation of his faith – especially interesting juxtaposed with a suspected violent extremist.

Again I was caught up until the very end of this book as to who the actual murderer was and it was no one I suspected!   I was so sure I knew what had happened but Khan definitely led me down the wrong path.  I like how Khattak and Getty work together, and I will definitely hope for a 3rd book with more about Rachel again.  Here we had much more of Esa and his family which was great, but I would have liked both of them.

I might have been better served by rereading the Unquiet Dead before starting The Language of Secrets.  There are references to the previous case and the fallout it caused – so while this works as a stand alone I would recommend starting with book one.  While Rachel Getty is definitely a lighter foil to her partner she’s not really so light herself.  These are pretty heavy books overall.  The dramatic past between Esa and his fellow police is plot relevant, but also felt like it bogged the flow down at times.  That is what kept this from being a 5 star read for me.

This cover fits so well and is totally creeping me out when I look at it now that I’ve finished. This is a perfect match for this mystery – it was creepy and dark!

Thank you Minotaur Books and Goodreads for this advance copy in exchange for an honest opinion!

Sixteen-year-old Sarah has a rare chance at a new life. Or so the doctors tell her. She’s been undergoing a cutting-edge procedure that will render her a tabula rasa—a blank slate. Memory by memory her troubled past is being taken away.

But when her final surgery is interrupted and a team of elite soldiers invades the isolated hospital under cover of a massive blizzard, her fresh start could be her end.

Navigating familiar halls that have become a dangerous maze with the help of a teen computer hacker who’s trying to bring the hospital down for his own reasons, Sarah starts to piece together who she is and why someone would want her erased. And she won’t be silenced again.

Goodreads described Tabula Rasa as the “Bourne Identity meets Divergent” and, much as I love Jason Bourne, I can happily say that I did not find that to be true.  This is not a dystopian novel.  Sarah is a patient at a special hospital where she’s undergoing experimental procedures to remove her memories.  When we meet Sarah she can’t remember why she’s even there.  There are no mirrors in the facility so she can’t even remember what she looks like.  There’s definitely a creepy vibe about the whole place so it does not really come off as a huge surprise when Sarah realizes the hospital is being invaded by soldiers.  I flew through this book because I just couldn’t wait to read what happened next.

The procedures to remove all of Sarah’s memories are never completed, so with some help she starts to slowly remember how she ended up in this hospital.  Sarah meets up with a young computer hacker who is trying to bring the facility down for reasons of his own and they team up to try to recapture all of her memories.  I really liked seeing Sarah rediscover herself and gain confidence I thought the romance-of course there was a romance-was sweet and not too over the top.

I thought the foreshadowing of who the villain would be seemed too obvious, but in the end I have to give Lippert-Martin credit because it was not at all what I expected!  I really liked Sarah -and it was great to be reading about a girl that wasn’t a white All-American Barbie.  Score one for the #WeNeedDiverseBooks movement!  Also awesome-this is a standalone book! No cliffhanger ending!  Yes, this did require some suspension of disbelief but I didn’t find the premise to be too wild and it was such a fun book I didn’t care.

Check it out if you want a fun and fast read!  This was a great debut and I will definitely be watching for more from Kristen Lippert-Martin.

4 stars!
Thank you Egmont USA and NetGalley for this advance copy in exchange for an honest opinion!