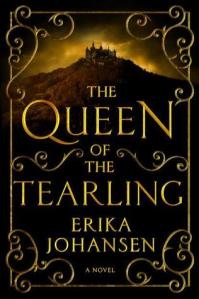 On her nineteenth birthday, Princess Kelsea Raleigh Glynn, raised in exile, sets out on a perilous journey back to the castle of her birth to ascend her rightful throne. Plain and serious, a girl who loves books and learning, Kelsea bears little resemblance to her mother, the vain and frivolous Queen Elyssa. But though she may be inexperienced and sheltered, Kelsea is not defenseless: Around her neck hangs the Tearling sapphire, a jewel of immense magical power; and accompanying her is the Queen’s Guard, a cadre of brave knights led by the enigmatic and dedicated Lazarus. Kelsea will need them all to survive a cabal of enemies who will use every weapon—from crimson-caped assassins to the darkest blood magic—to prevent her from wearing the crown.

Despite her royal blood, Kelsea feels like nothing so much as an insecure girl, a child called upon to lead a people and a kingdom about which she knows almost nothing. But what she discovers in the capital will change everything, confronting her with horrors she never imagined. An act of singular daring will throw Kelsea’s kingdom into tumult, unleashing the vengeance of the tyrannical ruler of neighboring Mortmesne: the Red Queen, a sorceress possessed of the darkest magic. Now Kelsea will begin to discover whom among the servants, aristocracy, and her own guard she can trust.

But the quest to save her kingdom and meet her destiny has only just begun—a wondrous journey of self-discovery and a trial by fire that will make her a legend…if she can survive.

Kelsea has been raised in hiding to be the queen her people need. She was sent away from her mother as a small child and it is years before she realizes her mother is never coming for her because she’s been killed. We meet Kelsea on her 19th birthday as she leaves her guardians to go and claim her throne. Kelsea is not under the illusion that she will even survive to her coronation, let alone reign long; but still she’s brave and she leaves with her Queen’s Guard-a group of men she’s never seen in her life.

Kelsea knows she’s alone. She learns any one of her Guard could have sold out to kill her and her only remaining family member wants her dead. Kelsea doesn’t waste time feeling sorry for herself or wishing for a different life. She takes action as she can and she is awesome! I am dying to learn what’s up with her necklaces and terrified for her to run into the enemy Red Queen.

The setting of the Tearling really confused me at first and that’s pretty much what keeps this from being a 5 star book for me. This somehow takes place in the future, but what caused the founders of the Tearling to flee America on ships is not explained. They’ve lost all their access to medical knowledge and have no printing presses. While the Tearling was intended to be some kind of utopia, the people are uneducated and desperate. I believe the Queen will change that!

Just a heads up, this is not a YA book in my mind. Not to say a young adult shouldn’t read, but there is violence and violent language. This is not for a middle grade reader yet.

Read this! And Holly this means you too! Word is that Emma Watson is already signed on to play Kelsea in the movie. I love this news-but since the book is ALWAYS better than the movie get the book now!

One last thing because I’m obsessed with this book now-Here’s the Australian cover which is PERFECTION.

Seriously read this book so I can talk about it with you.

Thank you to HarperCollins and Edelweiss for this advance read copy in exchange for an honest opinion.

Have you seen the news?!  JK Rowling has told Emma Watson–Hermione herself!– that she  “wrote the Hermione-Ron relationship as a form of wish fulfillment”, and that “for reasons that have very little to do with literature and far more to do with me clinging to the plot as I first imagined it, Hermione ended up with Ron” instead of with Harry himself.

She is also quoted as predicting that the pair would have needed relationship counseling.  To that I say no big deal! I think counseling is good for everyone and why not take something that could make your relationship stronger? I am sure Hermione would instigate counseling and prod Ron into going with her.  Hermione and Ron both are strong willed and opinionated, so I’m sure that taking time to check in with a non-emotional party and making sure they’re both being heard and validated in their marriage would be a good thing!  My sister says I’m assuming a nagging female role for Hermione in the situation that she’d take him to counseling.  I’m assuming the smart woman who knows that marriage is WORK and needs to be worked on continuously actually. So neener neener neener Holly!

Here is how the conversation about these revelations went down between my sister and I during the very boring Super Bowl last night:

For starters, WTF.  For seconds, it’s interesting that this is even a conversation. I’m watching the Superbowl and also reading comments on the twitter and the facebook where every commercial and facial expression is analyzed from every angle, but it still surprises me how much we, as in everyone, scrutinize authors outside of the books.  And sometimes completely change our minds about a book based on how we feel about an author.

Not that I’m changing my mind about anything! I just think its weird that a) JK can come out with a statement like that then b) it spreads like wildfire and c) we all go apepoop.

But truth?  I don’t love that in the end Harry & Ginny and Ron & Hermione are all happily ever after.  BUT NOT BECAUSE OF SOME BS IDEA THAT HARRY AND HERMIONE SHOULD BE TOGETHER.

The only reason it bothers me is that its just *too* neat and perpetuates this idea you must meet your soulmate, or at least someone you’re really into, by age 15 or you’re destined to wind up lonely and unhappy.

[Amanda disclaimer-I did meet my soul mate at 15. But I didn’t decide he WAS my soul mate for years and years!]

Of course I must remember who I’m talking to. That’s my point.  One of the 2 of us had met our best dude at 15.  The other of us would probably not have gotten along with dude at 15.  So it irks me a little that they all end up with their Hogwarts sweethearts.

I see your point.  Maybe because its a “kids book” the general Happily Ever After ending doesn’t bother me?  Because also, with the short epilogue she had to tie it neatly into a bow.  No room to introduce new loves.  I know some people would be happier if the epilogue was not even included– I am not one of them!

I also LOVE Hermione and I love that she doesn’t end up #2 to HP in a relationship.  She’s so much more than just his girlfriend.  Which I feel is how she would have ended up in perception if they had dated.

Yes, I agree with what you’re saying about Hermione not being #2 to Harry, but not sure I agree with the wording.  Ginny isn’t exactly a doormat!  Harry can deal with an independent woman!  But yes, I am glad Harry and Hermione are not like that.  Because she belongs to Ron! So, take back everything I just said about being annoyed with the ending because I actually don’t want it any other way.

But then again it’s not like they had average lives where they were meeting the loves of their life at 15.  They were all signed up to die together.  Kind of different than me being afraid of Brother Ruhl with J.

Also Ron gets kind of a bum deal.  What teenage boy isn’t at least a little bit of an idiot?

In summary, even if JK thinks the ending should be different, she shoulda kept that thought to herself.  Or maybe she should write a new book about the next generation at Hogwarts.  Though I’d like to think those kids don’t have quite as much seriousness to deal with!  Second, I’d also like to think that Hermione and Rob both learn to bring out the best in one another.  Third, I bet Ginny, Harry, Hermy and Ron hang out like every Friday night.  Big fun.

I agree, but I don’t want books about the kids.  I am ok with just compulsively re-reading.  Besides, JK is too busy writing more Cormoran Strike to write more HP!

What are your thoughts?  Do you think Harry and Hermione belonged together?  Or were you a Lavender fan for Won Won? Are we just crazy?  I’m off to reread!