Speed Kings: The 1932 Winter Olympics and the Fastest Men in the World, Andy Bull 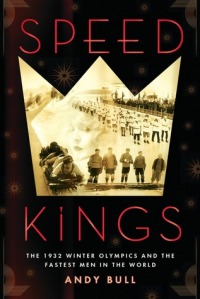 A story of risk, adventure, and daring as four Americans race to win the gold medal in the most dangerous competition in Olympic history.

In the 1930s, as the world hurtled toward war, speed was all the rage. Bobsledding, the fastest and most thrilling way to travel on land, had become a sensation. Exotic, exciting, and brutally dangerous, it was the must-see event of the 1932 Winter Olympics at Lake Placid, the first Winter Games on American soil. Bobsledding required exceptional skill and extraordinary courage—qualities the American team had in abundance.

There was Jay O’Brien, the high-society playboy; Tippy Grey, a scandal-prone Hollywood has-been; Eddie Eagan, world champion heavyweight boxer and Rhodes Scholar; and the charismatic Billy Fiske, the true heart of the team, despite being barely out of his teens. In the thick of the Great Depression, the nation was gripped by the story of these four men, their battle against jealous locals, treacherous US officials, and the very same German athletes they would be fighting against in the war only a few short years later.

Billy, in fact, went on to talk his way into the Royal Air Force—despite their Brits-only policy—and was there to fight the Nazis during the Battle of Britain. King of speed to the end, he would become the first American fighter pilot killed in WWII.

The exploits of Billy and his teammates make up a story that spans the globe, from Golden Age Hollywood to seedy New York gambling dens, to the most fashionable European resorts, the South Seas, and beyond.

Bobsledding, king of the Winter Olympics – who knew?  I admit I don’t think a lot about bobsledding in the years in between Olympics, but I was sold on this book from the description above.  You have to love a story of athletic determination and beating the odds to get to the Olympics – even if that wasn’t quite what this team’s story was.  It turns out that the bobsled course was a millionaires’ playground and the biggest challenge to the gold medal winning team was a paper pusher with a grudge.   This did read in parts like a society column (thanks Sarah),  but when balanced with the stories leading up the the Games I didn’t mind that.

A sport “for those rich enough to afford it and bold enough to brave it.”  The men that made up the Olympic bobsledding team definitely were bold and overall – wow really rich.  The connections between these men and Hollywood and Tammany Hall were fascinating to me and I definitely could have read more about those links.  I liked the in depth looks at the bobbers – but I was frustrated that it was most in detail for Billy Fiske.  He was a heroic man and deserves the attention completely, but for being a book about the team, it felt like in the end it was Fiske’s story with his teammates as footnotes.  I was particularly fascinated with Eddie Eagan – from birth on a Colorado ranch to a Rhodes scholar to Olympian- and I would have loved to have read more about his post-sporting life.  While the story of how the Olympics came to Lake Placid was interesting, I would have like more of the book to have been about the Games themselves rather than the maneuvering necessary to get an Olympic bid into place.   Maybe the length of nonfiction books like Romantic Outlaws has spoiled me – I just would have liked more depth overall.  In the end this was an interesting story and will give me something to think back on when I watch the next winter Olympics.

For the oddness of the story about the Dewey family and their involvement in Lake Placid alone this was worth the read – I’ll never look at this cataloging system the same way again.

Thank you Avery Books for this advance copy in exchange for an honest review!

All quotes were taken from an uncorrected galley proof subject to change in the final edition.